We use cookies on our website to improve the functionality and use of our internet site, as well as for analytic and advertising purposes. By continuing to use this site without changing your settings you consent to our use of cookies. More info

The flash is an important part of the trail camera. The flash allows you to capture those cryptic, rare and often nocturnal species of animals. There are various types of flash to choose from, each with its own advantages and disadvantages. Therefore, it is important to understand this before selecting a camera trap, but also when placing the camera in the field. At the moment we can roughly distinguish three different types of flash: the white flash (LED or Xenon), the visible infrared flash (low glow, red flash) and the invisible infrared flash (no glow, black flash). 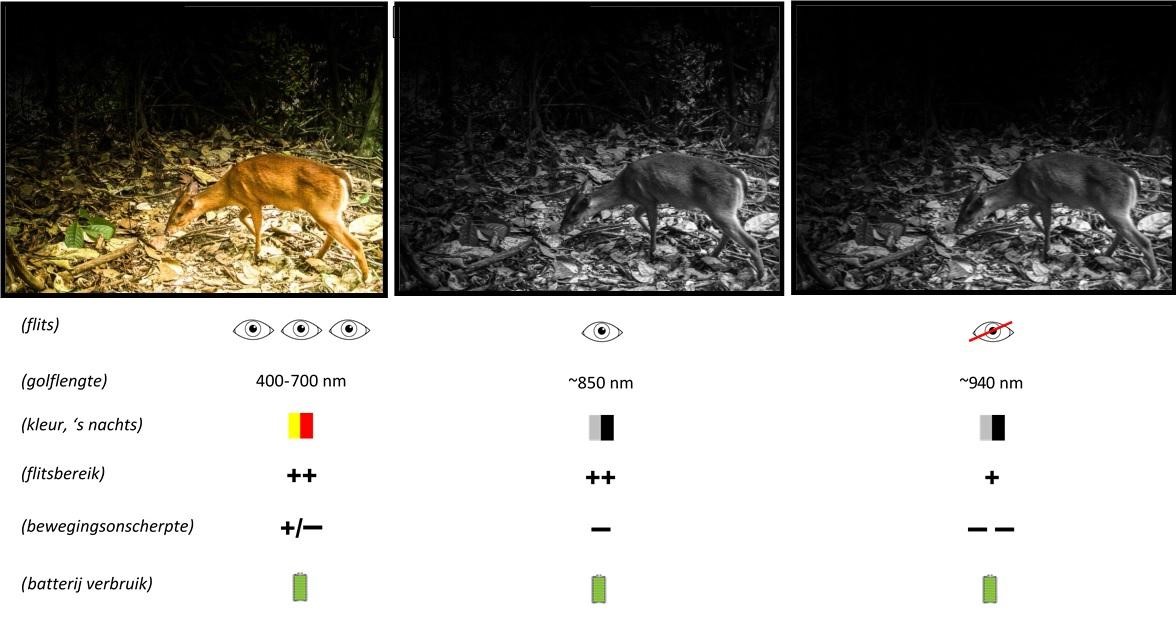 A comparison between the three different types of flash mechanisms. From left to right: white LED, Low glow, and No Glow (images from Wearn and Glover-Kapfer, 2017).

White flash
The white flash is what it all started with, and what the first camera traps were all equipped with. The great advantage of a camera with a white flash is that it also takes colour images at night. Apart from the fact that this generates the most appealing images of nightlife, it also helps in identifying specific animal species or even different individuals. However, the white flash has the disadvantage that it is visible to humans and animals and can therefore be disruptive and/or conspicuous. It seems that the disturbance of animals is not too bad: an initial startle reaction is common, but after a while the animal doesn't seem to be 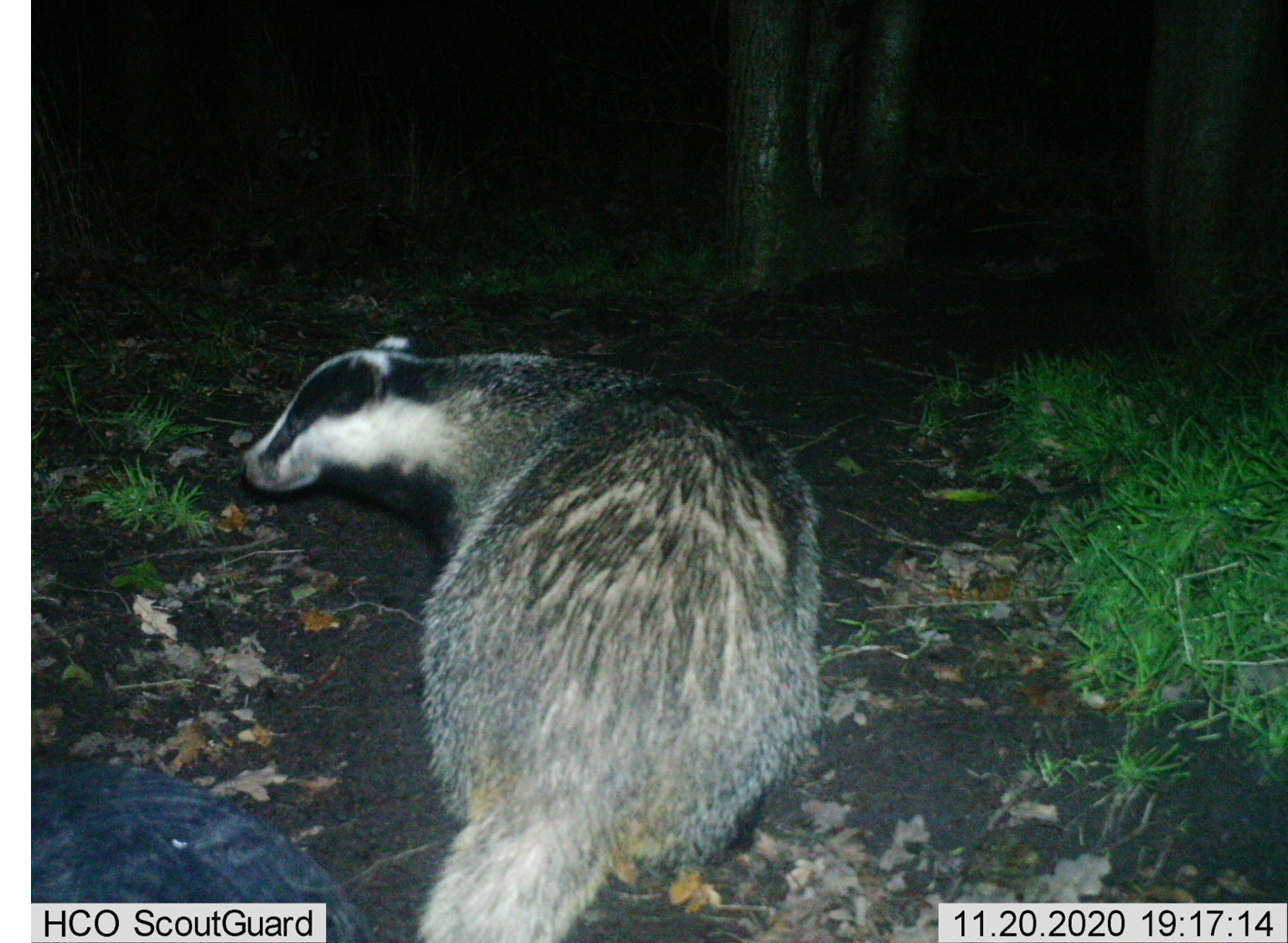 bothered by the lighting at all. As far as the striking effect on people is concerned, it is of course particularly important to consider the risk of theft. Within the camera traps with a white flash we can distinguish between a glow flash (incandescent flash or xenon flash) and an LED flash. An incandescent flash is comparable to the type of flash that we often find in the flashes of regular cameras. This is the type of flash that has to charge before every shot. As a result, you cannot shoot video with a glow flash, as this type of flash is only capable of producing a very short flash (sometimes several short flashes in quick succession). An LED flash, on the other hand, is much more like the type of flash we often see in modern smartphones. Compact, powerful, and in fact just a light that can be switched on or off, and that does not need to be charged before taking a picture. This does make it possible to shoot night videos. Incandescent flashes generally have less noise and are more powerful than LED flashes. Unfortunately, there are only a few models with a white flash on the market today.

Invisible infrared flash
Camera traps with an invisible infrared flash (also called 'Black flash' or 'No glow') produce infrared light in the wavelength range around 940 nanometres. This is therefore a little further into the infrared spectrum and also falls outside the visible light spectrum for (most) animals. However, it is true that this wavelength is just at the limit of what we humans can see, and there seems to be some creative use of labelling the flash as an 'invisible infrared flash'. This means that it sometimes happens that a model that is labelled as invisible infrared is in fact still vaguely visible to the human eye during night shots. Camera traps that really flash 100% invisible infrared are almost non-existent. But the fact is that this flash is much less clear than that of the visible infrared models, and of course also than that of the white flash models. Because of this feature, this flash is most suitable as a security camera or in places with a higher risk of theft or vandalism. As mentioned above, the invisible infrared flash usually has a somewhat smaller flash range (see the pictures of the owl below, made with the Browning 2021 Spec Ops Elite HP4 (invisible IR, right picture) and the Browning 2021 Recon Force Elite HP4 (visible IR, left picture)), less strong exposure, and slightly more trouble with motion noise. 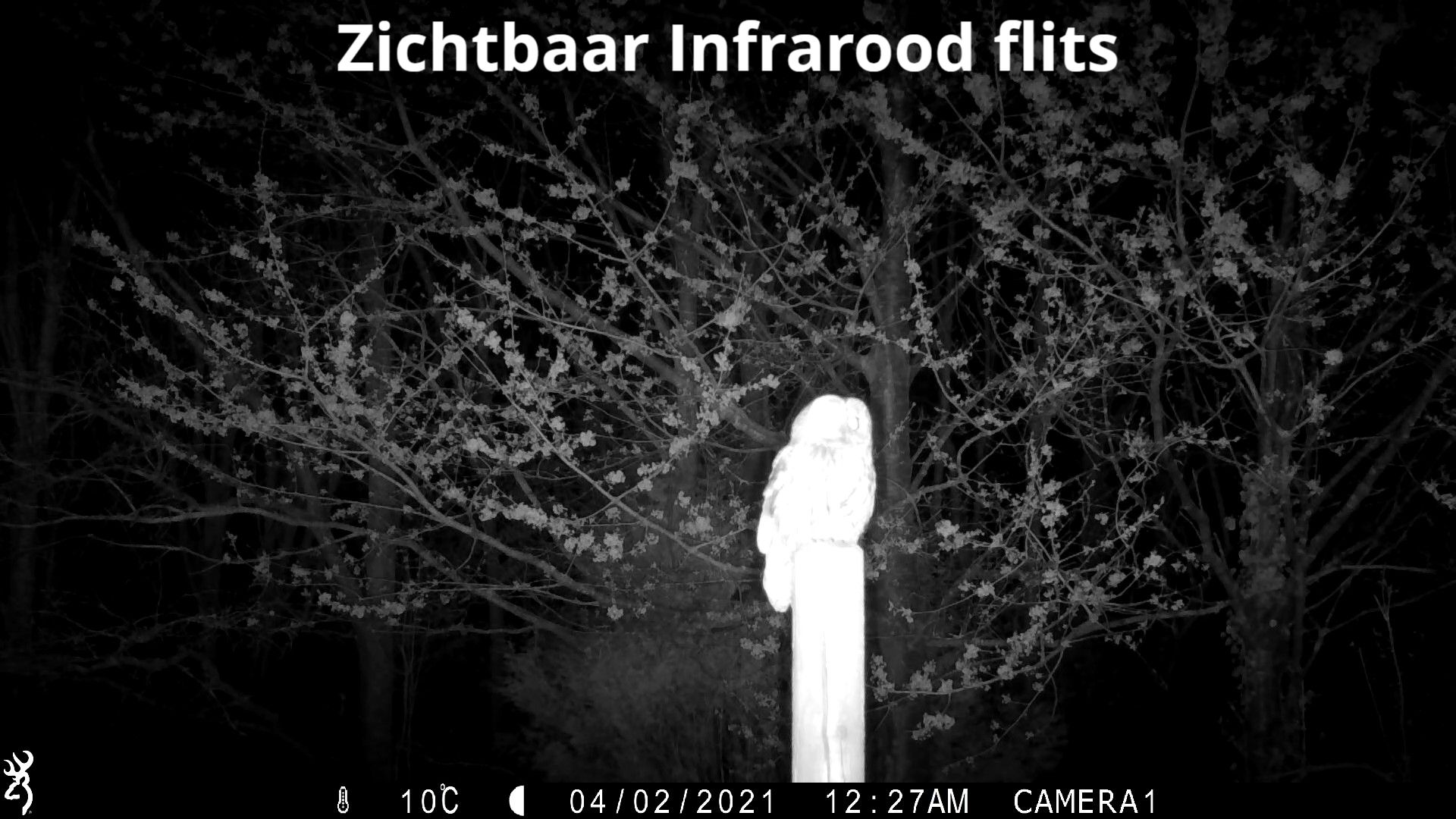 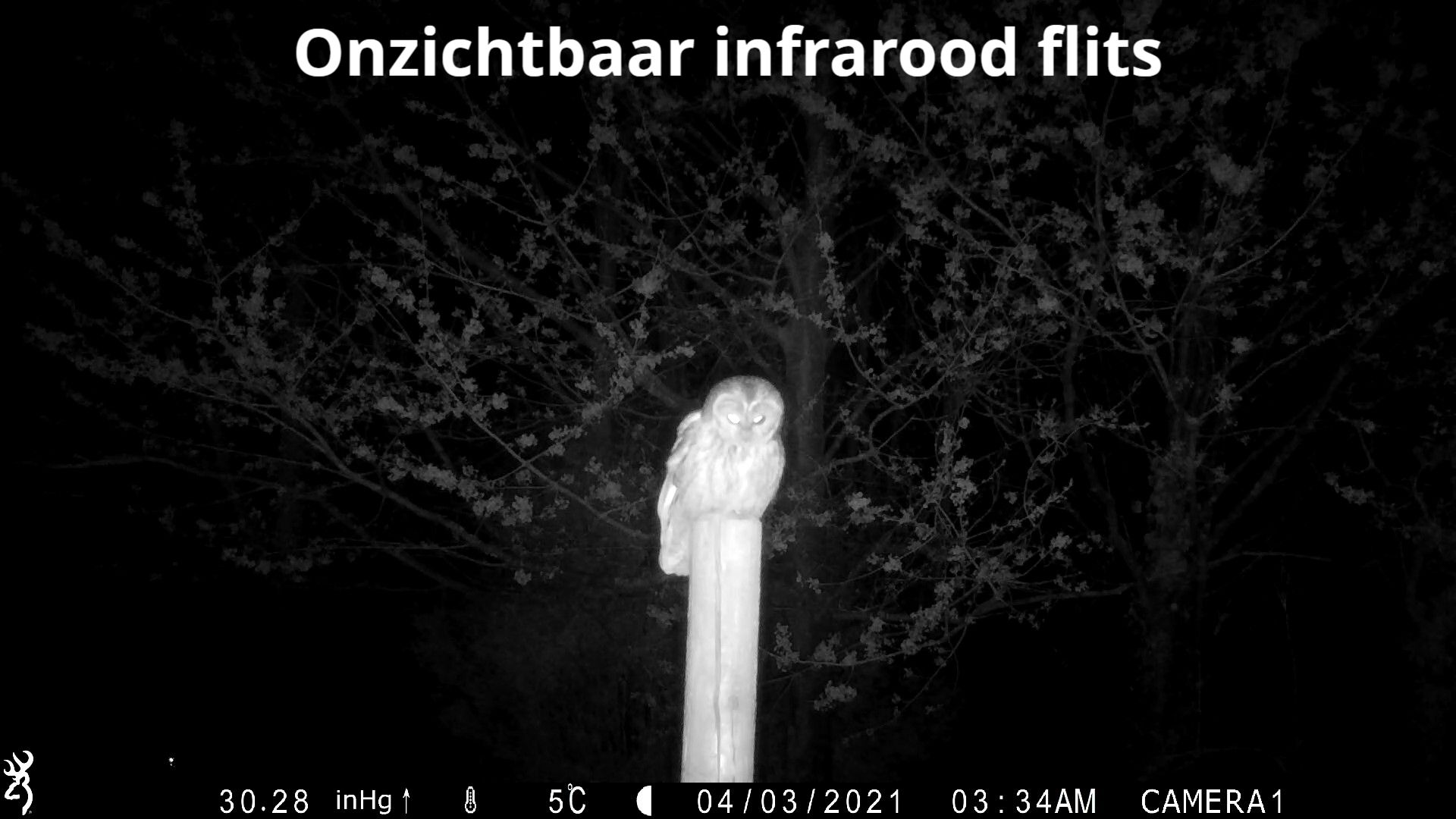 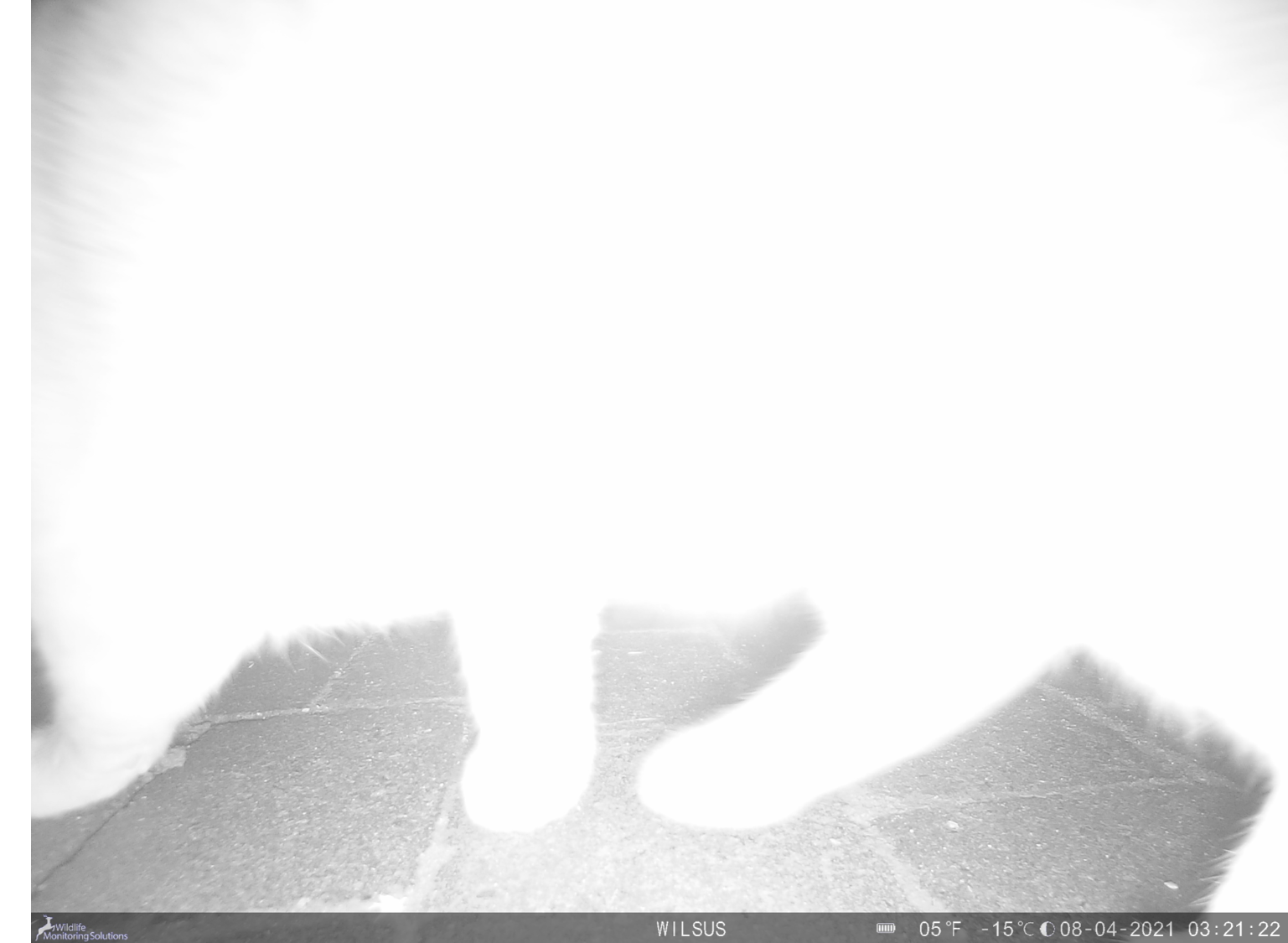 In addition to the fact that it is important to properly consider the most suitable flash type, it is also very important to realise that the method of placement absolutely influences the image quality of the night images. A good location is one where there is enough vegetation in the field of view for the flash light to bounce off, but not so much, and so close to the camera that you get a white haze from overexposure (see for example the cat on the right walking in front of the camera). Compare it with shining a torch in the middle of an open field. The torch will hardly give any light. If you shine the same torch on a blind wall 2 metres away, you will get a very brightly lit spot on the wall, with a considerable radiation to the rest of the environment as well. In principle, it works the same way with the flash of a camera; if you choose a location with no structure at all in the background, or with the camera pointed slightly upwards in the open field, the images will probably be very dark. If you choose a spot with very dense vegetation right in front of the camera, the image will be greatly overexposed. An optimal location is therefore a kind of compromise between these two extremes. 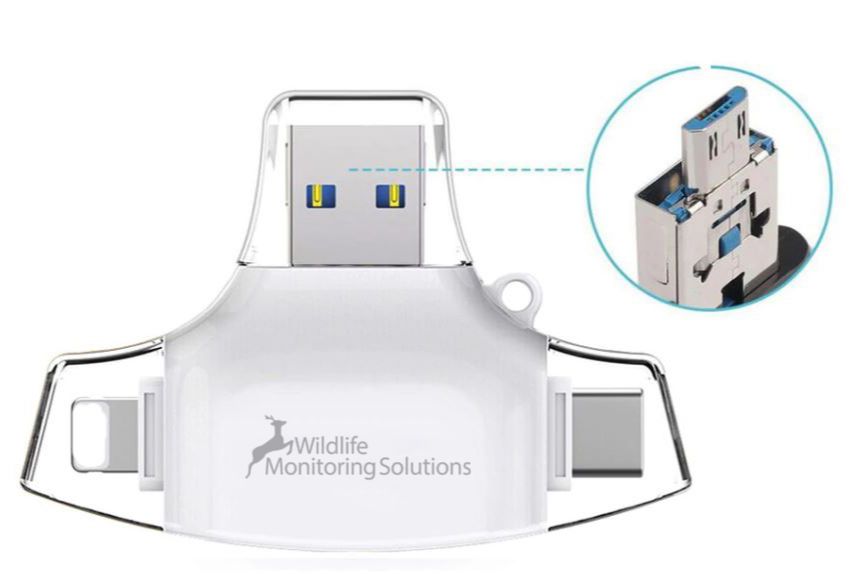 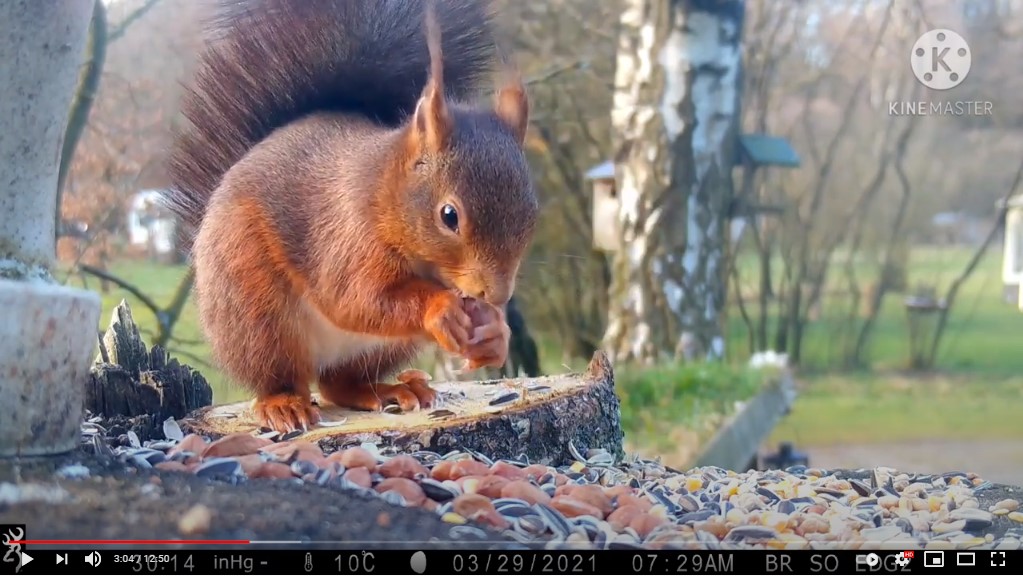 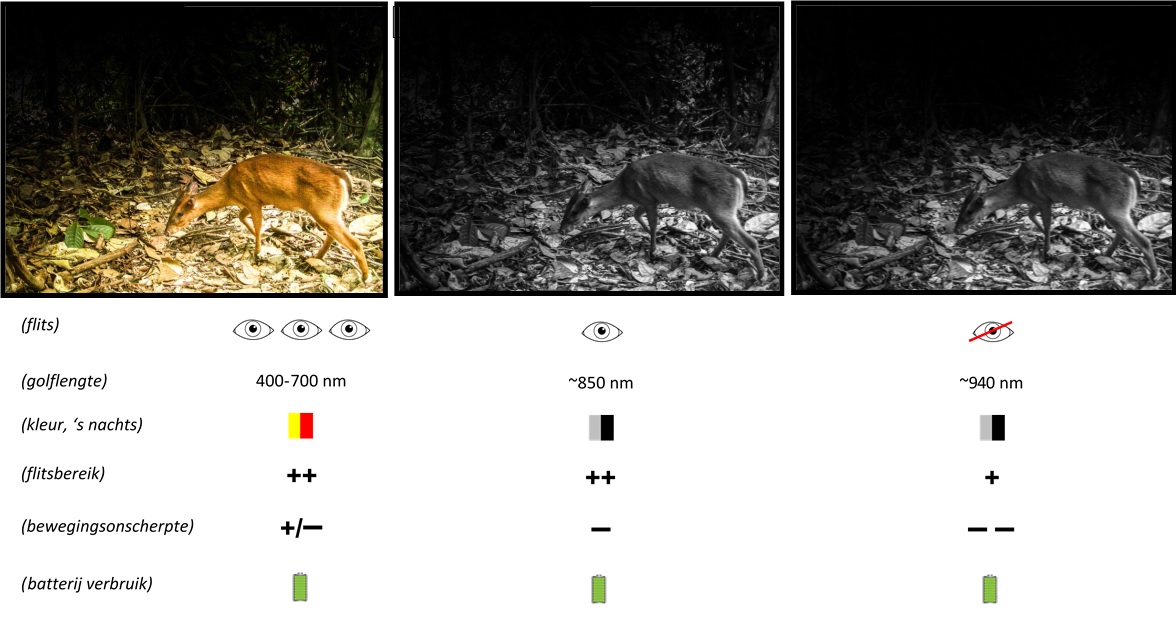 Interpolation of megapixels in camera traps 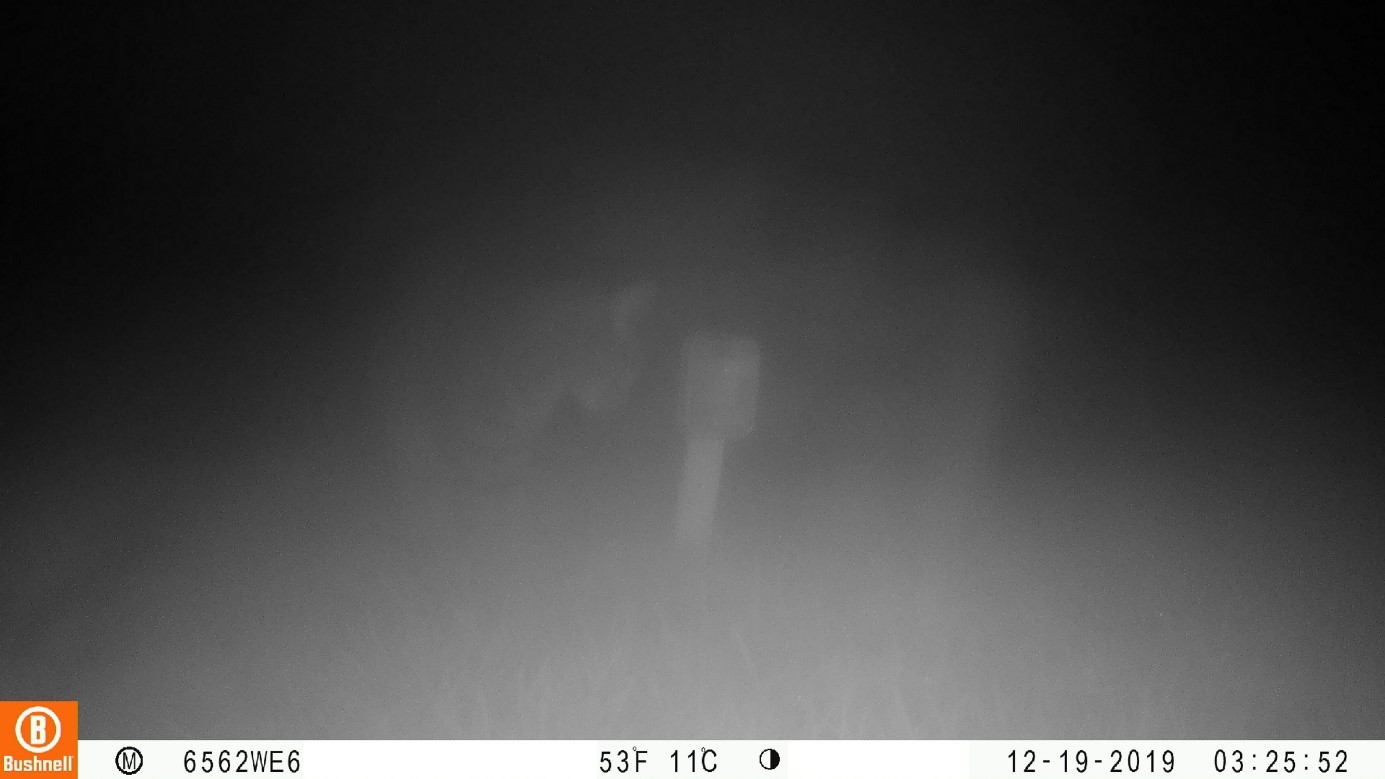 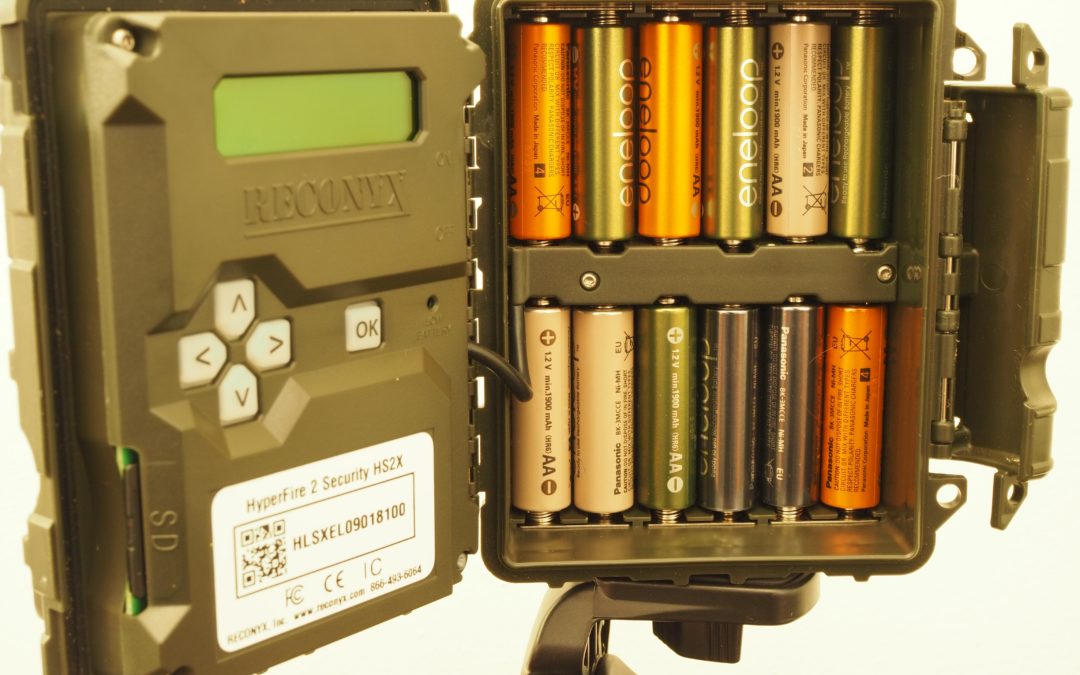 The importance of good batteries